This is the first show I went to see in the “Male Review” shows. I can’t say enough about this show. It was a Dance Review not a strip show. These gentlemen are pure dancers. The choreography is amazing. You are actually seeing a story line thru out the show. They have many numbers with groups of gentlemen and a few solos. There are many creative features and props used throughout the show. Having a woman Emcee, was great and she surely kept you laughing with her innuendos, jokes and storytelling. I thought what a great showroom, as it was done completely different than other showrooms where the stage is in front of you. NO matter where you sat, you could see the stage as it was like a big square in the room set up. My seat was right where you came into the showroom, which was in the balcony and still a great seat. I realized when the show started, that there was not a bad seat in the house. I really didn’t  want to participate in the shows activities, as I just wanted to sit back and see the show. I thought being in the balcony would be just that. Well, I was wrong, because the show is all over the showroom. The guys are in the balcony and all over the many areas of the showroom, dancing right in front of you. I did not have to participate, however had a great view of everything going on. This show has “Someone” for everyone. They certainly have captured the different groups of guys, so that many nationalities are represented. They make it  a comical reference, for example that they have the “Chocolate “section which consists of different colors, like the Milk Chocolate, Dark Chocolate. Mocha and Carmel Macchiato. This of course refers to different “colors” of the gentleman...very funny and very clever, and again, someone for everyone. My observation of the audience for this show was the 30-40’s group was dominate. Big groups of girls for special occasions, such as Bachelorette and Birthday parties were everywhere. They were very well defined as they had on sashes for these events and or tiaras. This is truly a Bachelorette night out show, Girls night Out, and Birthday celebrations. The show was about 90 minutes long and you just wanted to see more..........every number was more incredible than the other............ meaning, it was not about stripping, it was about the dance routines....... which were sexy and sensual! I was so amazed and impressed with the choreography I don’t remember very much nudity in this show, but everyone was screaming the entire show. I saw very few men in the entire audience at this show. However the waiters were all men! Nice change for the women!  Great show.... run as fast as you can to see it! A fun 90 minutes in Vegas!

Now this show is yet completely different than the other two.  Firstly, I saw quite a few men in this audience. That was very different than the other 2 shows. The age bracket here was approximately 21-65. A large range here, and I understand the name of Chippendales has been around for years and it is recognized all over the country. The seating was traditional theater seating with a long runway right down the middle for the guys to dance down and then a few steps to walk down to get to the audience. This was another amazing group of dancers. The dancers looked like a vast group of ages, which would appeal to many of different attendees.  They covered having “colorful” gentleman of different races, again that will appeal to different guests. It was clear that there were some Bachelorettes and Birthday celebrations, but this audience was more of people having a good time, celebrating being in Vegas and enjoying themselves.

During the show, there was a lot of interactiveness with the audience, a lot of comedy which made you laugh out loud, and even a mock Game Show. This show had the most BUTT nudity of all. Lots of it... but done very classy. There were many numbers with many props like a Motorcycle number, Firemen, Cowboys, and even a tribute to our soldiers. The sensual shower scene was done very classy as so was the tribute to Fifty Shades of Grey concept. They were very trendy using music from the TV Show Empire, which many people recognized immediately. The host Brian, is an amazing soloist and sang a few songs that brought down the house. He really was not one of the dancers throughout the show, however he did a few numbers and had the audience screaming to no end! I ran into a few ladies who brought earplugs as they knew what they were in for. At the end of the show, you could go up and take photos with the Chippendales guys and then purchase the photo. The lines formed immediately to capture their memories and take their photos home. 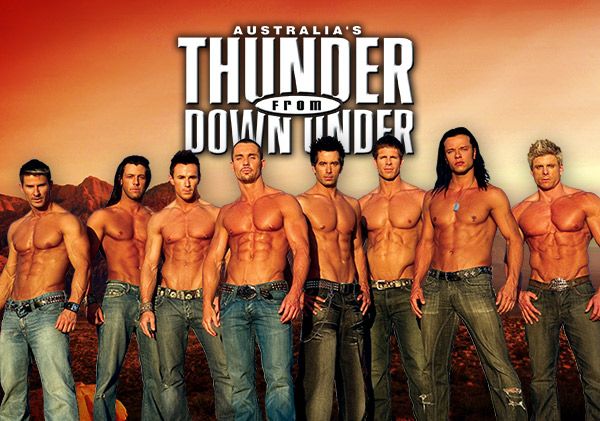 I had not seen this review show for about 10 years.  This was my second stop on this journey of investigation! I was happy to see the host “Marcus” was still there and doing an amazing job. He keeps you laughing and we just love the Australian accents. This show really had a different audience. This was the younger crowd. The 20 something group.  Like 20-30 in the age bracket over all. This show was entertaining but set up quite different. Each performer had their own solo. There were not many props used and definitely not all nationalities were shown. I think different women like to see different races, creeds and colors of men, and this was a limited selection. This stage was set up like a normal stage, in the front of the room as we are used to seeing. In the main center section, you could clearly experience the guys on your tabletops, as the tables were like Fashion Show Runways for the guys to walk down, dance and do their solos, paired with another dancer being on the frontal stage at the same time, main stage. Regarding nudity, there was minimal, however the audience was forewarned to get the cameras ready for “the Butt “shot.The guys were all lined up on the stage after a great group number, and bared their butts to the audience of screaming girls. I only saw a few men in the audience for this show as well. The show was approximately 70 minutes and afterwards, you were invited to come up and get in line to take a photo with the guys. Posters and Calendars were given away as well as for sale. The lines grew immediately of the girls wanting their photos with THUNDER  and then purchasing them on their way out. Another fun evening in Vegas to enjoy with your girlfriends!

Most people would say these are “Male review shows”, and they are all the same. THEY ARE NOT!  See them all!!!

Overall, all three shows have something for everyone. Different prices, different show styles, and even different set ups in the show rooms. What they all have in common is a group of hardworking gentlemen, who are entertainers and enjoying what they do, which certainly comes thru! They make their audiences smile, feel special and have a blast!

I commend every one of these gentlemen for their dedication, and all the work they put in behind the scenes, to make a great show for their audiences.  Hats off to them!!!!